Night of the New Moon 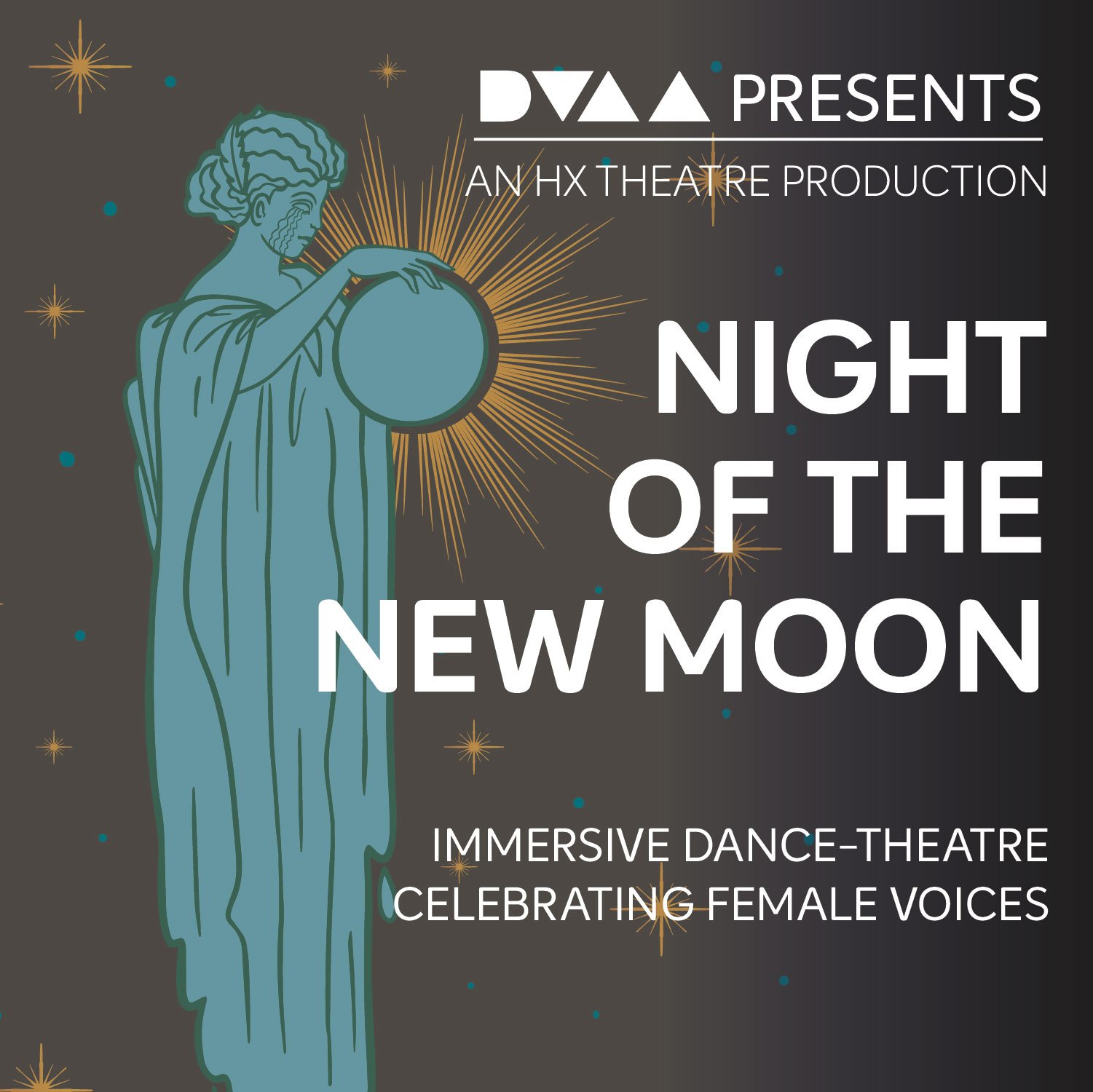 Saturday, August 27th, something is HAPPENING in Narrowsburg.
TICKETS AVAILABLE AT BOX OFFICE BEGINNING AT 5 PM

The Delaware Valley Arts Alliance and HX Theatre invite you to experience Night of The New Moon, a dance-theatre ritual celebration of female voices.

Walk along the corridors of the past, and take a glimpse into the future. Night of the New Moon is an immersive, one-night-only performance on August 27th at the Tusten Theatre in Narrowsburg. Doors open at 6 PM.

Immersed in a tapestry of light and shadow, sound and silence, dance and stillness, Night of The New Moon, from HX Theatre, explores the fascinating and provocative voices of female figures from ancient history to the present. Experience the music of medieval composer Hildegard von Bingen, and learn the Herstory of local legend Lucy Ann/Joseph Israel Lobdell.

Night of the New Moon features the artistic talents of performers formerly with Sleep No More, Martha Graham Company, Twyla Tharp Dance, The Rockettes, and other distinguished dance companies.

HX Theatre and DVAA wish to illustrate gender inequality in the workplace. We invite audience members adversely affected by the gender wage gap, including women, femme, non-binary, and trans-identifying individuals, to use the EQUAL PAY discounted ticket at 87% of the regular admission price.

A portion of the proceeds to benefit local women’s shelters.

HX Theatre is an experimental multi-media dance-theatre collaborative founded by wife and husband duo, Mary Beth Hansohn and James Graber, working with select artists to produce transformational experiences exploring who and how we are.

HX Theater receives additional support from The Field, a multi-disciplinary non-profit organization working with artists and arts workers to help them thrive.

Mary Beth Hansohn has danced for Twyla Tharp Dance, The Metropolitan Opera, Cincinnati Ballet, Dayton Ballet, The Ohio Ballet, La la la Human Steps, and The Cleveland Opera. She has danced in works by Eduard Lock, Laura Dean, Lynn Taylor-Corbett, Septime Webre, Stephen Mills, and Donald Byrd. Her principal dancer roles include Lady Macbeth in “Macbeth”, Mina Harker in “Dracula”, Gertrude in “Hamlet”, the Title role in “Giselle”, and the Russian Girl in George Balanchine’s “Serenade”. Other featured roles include “Nine Sinatra Songs”, “Eight Jelly Rolls”, and “Preludes and Fugues” by Twyla Tharp, as well as “Agon” by George Balanchine. Mary Beth continues to dance in her community in Sullivan County, NY, and is a teacher at a non-profit school in Ridgefield, CT.

Ramona Kelley is from Berkeley, CA where she began her training at Berkeley Ballet Theater. She went on to earn a BFA in dance from New York University’s Tisch School of the Arts. Ramona danced the principal role of ‘Betsy’ in Twyla Tharp’s Come Fly Away and went on to dance with the Tharp company creating new roles in addition to performing repertory works. She is a principal guest artist with Oakland Ballet and has also performed with Christopher Wheeldon’s An American in Paris, Dance Lab New York, Minnesota Dance Theatre, Claudia Schreier and Co, Post:Ballet, Sidra Bell, Cherylyn Lavagnino Dance and Phantom of the Opera (25th Anniversary Tour) among others. Ramona has taught for Pacific Northwest Ballet, as well as master classes in Tharp technique across the country. She is an adjunct ballet faculty at NYU’s Tisch Dance.

Amy Piantaggini trained at the Boston Conservatory and the Martha Graham School of Contemporary Dance, where she received scholarships from the Gregory Peck Foundation and as a Finalist for the Coca-Cola Award for Artistic Excellence. Ms. Piantaggini is a former member of the Martha Graham Dance Company and the Martha Graham Dance Ensemble, in which she danced many soloist roles including “Satyric Festival Song” and “Conversation of Lovers”. Anna Kisselgoff of the New York Times said that Amy “made a luminous New York debut in Graham’s abstract view…” October 7, 1998. Amy has danced for the companies of Javier Dzul, Richard Move, and James Robey, and currently dances for Edgar Cortes Dance Theater. Amy’s teaching experience includes numerous schools throughout New England including the Hartt School/University of Hartford, and as a guest for Central Michigan State University, Webster University, Endicott College, Barnard College, and Dean College. She received her MFA in Interdisciplinary Arts from Goddard College with a focus in early American Modern Dance and Embodiment Theory.

Kristin Fayne-Mulroy
Kristin is a newspaper editor, musician, herbalist, tarot reader, and native New Yorker. She has been reading tarot for almost 20 years, and draws on her knowledge of astrology, mythology, and Western herbalism to enrich her readings for her clients, helping them to see both the practical and magical aspects of any situation.

Isabel Braverman
Isabel is a trained dancer and has been in dance class since she could walk (her mom is a dance teacher). In high school she attended the American Academy of Ballet at SUNY Purchase. During college she completed the dance program at Ithaca College and performed in the Theatre Department’s dance show. Upon graduation she returned to the Catskills area and teaches contemporary dance at The Dance Center in Sparrow Bush, NY. She has performed locally with Catskill Dance Company, NACL Theater, Callicoon Art Walk, and more.