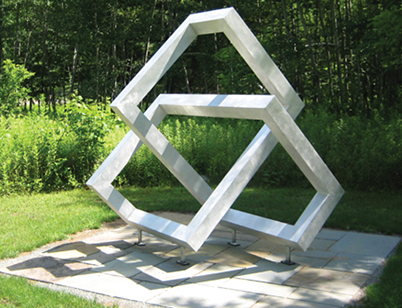 This sculpture is made of one continuous line, which turns and overlaps itself to form a shape known as a cubic trefoil. Forrest Myers, known as Frosty, was a co-founder of the Park Place Gallery in SoHo, in New York City, in the early 1960s. He and others in the group were looking for new means of expression and new mediums for their art. Myers became obsessed with lasers, a recent scientific invention that was not readily available to the public. He began designing works of art that would incorporate lasers in 1963, but he was not able to realize them until 1967. Lazer’s Daze takes its title from his interest in this cutting-edge new technology.